Dr. Andrew Moutu was originally trained in philosophy and anthropology at the University of Papua New Guinea (1991-1996) before undertaking his masters and doctorate degrees in social anthropology from the University of Cambridge (1998-2003). Following his doctorate he held two prestigious awards. Firstly as a British Academy Postdoctoral Fellow which saw him working at the University of Cambridge (2004-2007).  Secondly as a Leach/Royal Anthropological Institute Postdoctoral Fellow which saw him working at the National University of Ireland (2007-2008).
Following his postdoctoral stints he got appointed as a Lecturer in Anthropology at the University of Adelaide (2009-2010). It was in Adelaide that Dr Moutu was persuaded to return home to help find a team to rebuild the National Museum & Art Gallery from a dwindling state of administration. Dr Moutu is not a stranger to the work of the museum having previously served as the Principal Curator of Anthropology (1996-2003) and Curator of Anthropology (2004-2006) before undertaking graduate studies.
Dr Moutu has a diverse range of academic interests including cover philosophical anthropology, legal anthropology and intellectual property rights, museums and material culture, Melanesian systems of knowledge, holographic imagination and the anthropology of perception. His first monograph, entitled Names Are Thicker Than Blood was recently published by Oxford University Press (see http://ukcatalogue.oup.com/product/9780197264454.do).
More recently he has taken up an interest in Papua New Guinea's modern history and with the ongoing concerns about the intersection between sorcery, witchcraft and the law in Papua New Guinea.
Outside of the National Museum, Dr. Moutu also serves as a Board Member of the PNG Institute of Biological Research (http://www.pngibr.org) which has an ongoing interests in research for conservation in Papua New Guinea. 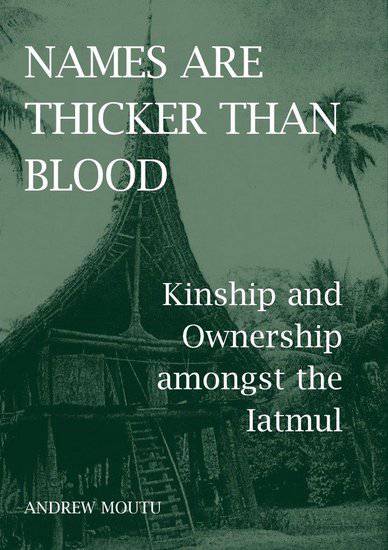 Names Are Thicker Than Blood

Please share your impressions, remarks, suggestions to help us improve the new Southplanet website. Don't hesitate to signal any bugs that you happen to come across !

With the support of